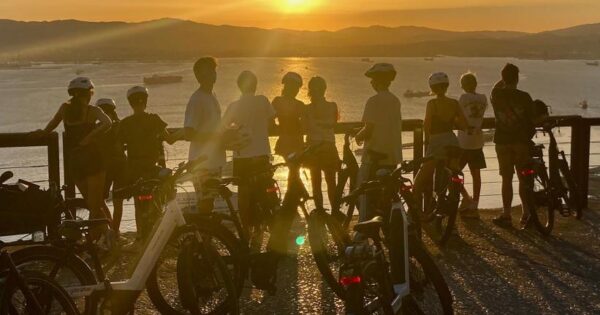 Over the past six weeks, Anton Calderon has taken us deep into all aspects of our local cycling culture, highlighting individuals and businesses using eCargo bike solutions as alternatives to cars and vans, down to our cyclists competitors leaving this week to compete on the world stage at the Commonwealth Games.

Never before has Gibraltar entered so many elite cyclists across such a wide range of disciplines. How proud we should be of them and all the athletes competing in the Games as part of Team Gibraltar.

A common theme throughout the series has been the obvious lack of dedicated cycling infrastructure despite the escalation in bicycle adoption.

The perception of road safety for cyclists in Gibraltar is still extremely poor.

Very few parents are about to allow their children to pedal alone on the roads to get to school.

The game changer will be the bike lanes we see transforming the quality of life for all city dwellers who have civil servants brave enough to create them.

Episode 5 of Biking Mad saw Anton visit the city of Cádiz and interview urban planners who were able to clearly demonstrate the benefits of taking back control of their streets to promote active and sustainable modes of transport such as walking and cycling .

Increased visitor numbers and the regeneration of abandoned commercial areas are just some of the measurable results.

Also during this episode, Gibraltar’s Transport Minister Paul Balban gave us a glimpse of what we can expect for our city in the hopefully not too distant future.

Committing to integrating a mobility plan for the city that encourages active and sustainable travel, and that ensures the fluidity of our circulation, does not always receive the immediate positive response from the community that one might expect.

Cadiz town planners describe how they were lambasted by members of their local community and the press for daring to wrest some control from the overbearing car.
In Gibraltar, it’s pretty much the same story.

As soon as cycling infrastructure is introduced into public space, it is met with derision and ridicule from those who feel that their vehicular freedoms are somehow going to be curtailed.
There seems to be a common misconception.

The introduction of conditions which will ensure a safer environment for cyclists and pedestrians does not mean that users of traditional motor vehicles will be unfairly affected.
In fact, quite the opposite is true.

No one questions the fact that all kinds of motor vehicles have their time and place depending on the individual needs of the user.

The distinction we need to make is between essential and non-essential vehicle travel.

Encouraging people to use cars and motorbikes less and creating an environment that will make people safer to cycle and walk will reduce the number of vehicles on the busy road network.

This is a huge bonus for anyone with essential vehicle journeys such as the elderly or disabled, families with young children, commercial vehicles and our taxis, public transport and emergency services.

The number of vehicles registered in Gibraltar has increased during the pandemic and is now estimated at between 40,000 and 45,000.

Our road network hasn’t grown at such a rapid pace, and given the number of residential properties under construction (currently 2,000-3,000), we can only expect car ownership to continue to thrive.

As Anton’s interviews in Cádiz clearly demonstrate, building cycling infrastructure is no longer a leap of faith into the unknown that may or may not have a positive effect on the whole community.

Stuart Hedley is the owner of EBike (Gibraltar) Ltd.