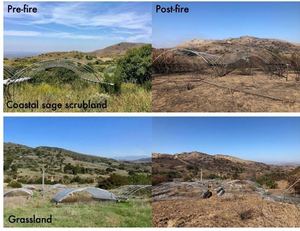 Soil bacteria at the surface level affect the global carbon cycle. These microbes break down dead leaves and stems, pumping carbon into the atmosphere and soil. However, microbes are sensitive to changes in their environment. To predict how the carbon cycle may change as a result of climate change, scientists need to understand how soil microbes respond to environmental shocks such as drought and forest fires. However, scientists don’t know how deep these disturbances penetrate below the soil surface to affect microbes. This study found that bacterial communities closer to the soil surface were more susceptible to drought and fire. These results mean that deeper soils can serve as a refuge for bacterial communities living through environmental disturbances like wildfires.

Microbiologists often treat the soil surface – the top 10 centimeters – as a uniform layer. However, this study shows that bacterial communities respond to environmental changes in a depth-dependent manner. Microbial communities just 1 cm below the soil surface are surprisingly resilient to fires that burn grasslands and shrubs. This could help stabilize nutrient cycling in the soil, potentially promoting ecosystem health and recovery over time.

This study tested how bacterial communities near the soil surface responded to drought and wildfires, two disturbances that are expected to become more frequent and intense in many parts of the world. The researchers took samples from three depths: the leaf litter layer on the soil surface, the top 2 cm of soil, and the top 10 cm of soil. They collected samples before and as long as a year after a fire that passed through the Loma Ridge Global Change Experiment, a field study in California that mimicked drought in semi-arid prairie and scrubland of adjacent coastal sage for over a decade. Using 16S amplicon sequencing, researchers monitored bacterial community composition and assessed community change with drought, fire, and soil depth over time.

The researchers found that bacterial communities in leaf litter and top soil layers were sensitive to these environmental factors. However, the effects diminish with depth. For example, the sensitivity of the bacterial community to drought was three times higher in the litter layer than in the top 10 centimeters of soil. In addition, forest fires changed the bacterial community composition in the litter layer, but did not affect communities in the soil. Interestingly, soil bacterial communities tolerated fire equally whether they were exposed to drought or not. These results are important because bacteria in litter and surface soil process, store and respire carbon. Also, nutrients can move through the soil when it rains, causing shocks germs in one part of the floor can have cascading effects on other parts. Knowing that microbes just below the soil surface can be safe from drought and fire offers a glimmer of hope that the vital microbiome benefits like carbon cycle can be resilient to a changing climate.

This work was supported by the Department of Energy Office of Science, Office of Biological and Environmental Research.

Disclaimer: AAAS and EurekAlert! are not responsible for the accuracy of press releases posted on EurekAlert! by contributing institutions or for the use of any information through the EurekAlert system.