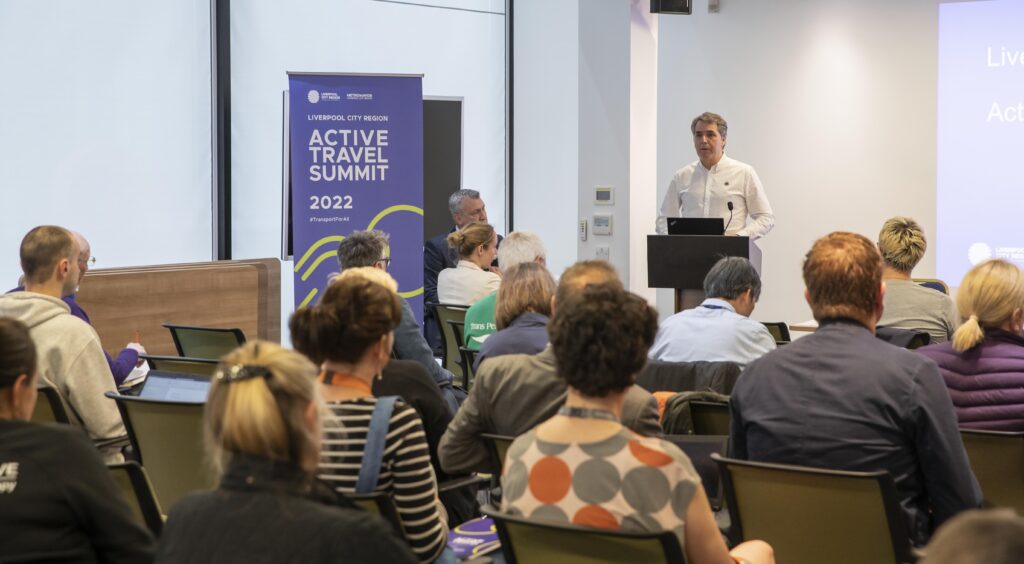 Opinion: What we learned from the Liverpool City region’s first active travel summit

Active travel can be one of those topics where public conversation generates more heat than light. But we know that encouraging more people to walk and cycle, especially for short journeys, will be key to improving the environment, air quality and the health and well-being of all those who live and work in the Liverpool City area.

That’s why, last month, Mayor Steve Rotheram hosted what we hope will be the first of many Active Travel Summits in the Liverpool City area. The event brought together policy makers, local community organizations and advocacy groups to share knowledge and experiences and to discuss the future of walking and cycling in the region.

Also attending the event were local activists from across our region, including Ibe Hayter, founder of Cycle of Life – a Toxteth-based organization which aims to support cycling within the local community, providing access to bikes and bicycle repairs for local people with low income households.

Faced with a growing climate emergency, the Liverpool City region has pledged to become carbon zero by 2040 and Mayor Rotheram has pledged to move forward with a major green investment programme. But with more and more journeys being made by car each year, it is clear that travel habits in the region need to change.

Vehicular traffic is the main cause of air pollution in the Liverpool area and, although home and work carbon dioxide emissions have been falling steadily, emissions from transport have increased since 2013, mainly due to the use increase of the car.

Poor air quality in the city area is estimated to kill around 800 people every year and worsen health problems such as asthma, COPD and fibromyalgia.

We also know that poor air quality disproportionately affects low-income communities, which are more frequently exposed to pollution both at work and at home, adding a major social equity dimension to the issue.

The effects of carbon emissions and poor air quality are truly clear, and so is the solution: we need to get people out of their cars and to take more trips, whether by public transport, by bike or by foot, and we can only do this by making active travel safe, easy and accessible.

According to our own research, if everyone in the Liverpool City area could swap two car journeys a week – to local shops, work or school or even to the train station or bus stop as part of a a longer journey – for a walk or cycle, this could reduce carbon emissions by around 130,000 tonnes. This is the same quantity produced by a city of about 30,000 inhabitants in one year.

One of the highlights of the summit was the screening of a new film produced with our Walking and Cycling Commissioner and BAFTA-winning actor and presenter Simon O’Brien. A lifelong active travel advocate, Simon uses the film to explore some of the country’s finest walking and cycling routes and details the positive impact of this new infrastructure on health, the local economy and the environment in these areas. .

Just moments from where the event was staged, at the Combined Authority’s offices on Liverpool’s Mann Island, is the Strand, one of the city’s main thoroughfares which has recently been upgraded with new top-notch separate pedestrian and cycle routes.

The route is just a small section of a planned 600km active travel network which will cover the six boroughs of the Liverpool City region – Halton, Knowsley, Liverpool, Sefton, St Helens and Wirral. To date, over £30million has been committed to building safe and separated footpaths and cycleways.

Mayor Rotheram used his address at the summit to announce that an additional £12million had been secured from the Department for Transport’s Active Travel Fund to build high quality walking and cycling routes in the area of the city.

The funding will also help establish school street programs — which reduce traffic congestion and pollution at school gates during pick-up and drop-off times — as well as low-traffic “livable neighborhoods,” which , according to recent research by Sustrans, were supported by 69% of people in the urban area.

There will also be a “mini-Holland” feasibility study to assess how parts of the region can be made as walkable and cycle-friendly as similar neighborhoods in Dutch cities.

By introducing traffic calming measures in the form of usable street furniture such as planters or benches, these devices will give priority to walking and cycling over car traffic and help make neighborhoods safe and pleasant. to live, work and spend leisure time.

The recently announced funding comes on top of more than £200 million from the City Region Sustainable Transport Settlement (CRSTS) which has pledged to upgrade motorways, from pavement resurfacing works to lampposts, which will support the improvement of cycling and walking routes.

This brings the total amount of funding for the Liverpool City Region Active Transport Network to almost a quarter of a billion pounds – a serious level of investment that will help put walking and cycling on a better footing. equality with other parts of the local transport system such as rail. or bus.

As this year’s Active Travel Summit drew to a close, delegates gathered to discuss the event and I was extremely heartened to learn that so many of those who attended felt full of energy and optimistic about the future of walking and cycling in the Liverpool area. The challenge we face is clear – we need to work hard and at a serious pace to build a better active travel network, to help and support people who actively travel.

Mayor Rotheram and all of us at the Combined Authority are committed to making the Liverpool City Region the best place to walk and cycle in the country and we will continue to work with everyone – whether in within government, local authority or community organization – to make it a reality.