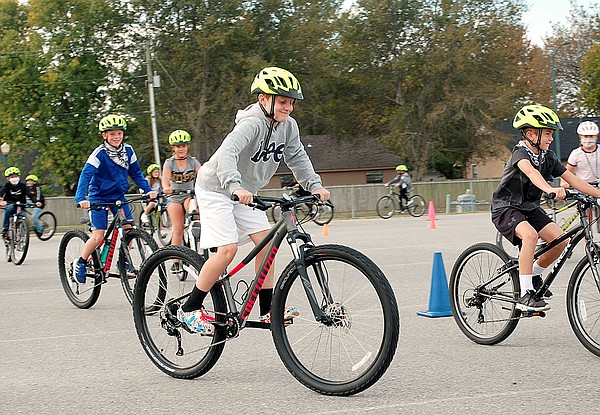 Students at Siloam Springs Middle School get active and learn lifelong cycling skills through a new Riding for Focus program provided by a partnership between the non-profit organizations BikeNWA and Outride.

The school was selected to be part of the program in July, which provides a fleet of 34 bikes, helmets, starter maintenance equipment, teacher training and a program, according to teacher Chuck Jones. It was one of six colleges in Northwest Arkansas chosen to participate in the program in fall 2020 and spring 2021, according to the BikeNWA website, bikenwa.org. BikeNWA and Outride received support from the Walton Family Foundation for the educational initiative, the site says.

The program teaches students in grades six to eight bike skills and safety, giving them the knowledge they need to become lifelong cyclists, the site says. Students learn driving etiquette, fitness and training concepts, decision-making and handling the bike, he says. The program also uses the bicycle as a tool for students to achieve academic, health and social success, he says.

At Siloam Springs, physical education students learn in-depth skills and ride bikes as part of a six-week fitness unit, Jones said. The program includes 12 lessons, each building on top of each other, starting with basic skills like starting and stopping and then moving on to more advanced skills, he said. The program also teaches students about safety and to be aware of what is going on around them, he said.

â€œIt’s a really good thing,â€ Jones said. “It just breaks down the fundamentals of riding a bicycle.”

During a class last week, some students who had never ridden before the program practiced their balance while others, more experienced, zoomed with confidence. At the end of the lesson, the students practiced a slow run, seeing who could get to the finish line last without losing their balance, setting a foot or turning. The activity teaches balance skills, Jones said.

Because middle school serves fifth and sixth grades, fifth graders can also participate in the program, Jones said. All students in the school will be riding Riding for Focus in their fifth and sixth years and hopefully improve their skills even more in their second year, he said.

â€œOur goal is to be able to take these bikes and go to City Lake and drive them there and be able to teach kids how to ride safely on trails and sidewalks and things like that,â€ Jones said. .

Jones is hopeful that cycling can become a lifelong fitness activity for students. There are lots of great trails and safe places to ride in Northwest Arkansas, so biking is an activity students can do with their families on the weekends, he said.

â€œWe want kids to be active,â€ Jones said. “Not everyone likes sports, so we want children to learn how to be healthy and active, whether you play sports or have a recreational activity that you enjoy doing.”

About 50 volunteers showed up to help assemble the bikes as they arrived during the third week of school, including the local National Interscholastic Cycling Association (NICA) team for middle and high school students, Jones said. .

“We hope that by getting the kids up there, we can introduce them to the NICA program if they are interested in doing something like this,” he said.

Janelle Jessen / Siloam Sunday The fifth graders practiced their balance with a slow run last week, trying to see who could cross the finish line last without setting a foot for balance or turning. Siloam Springs Middle School is offering a new Riding for Focus program that allows students to get active and learn cycling skills.