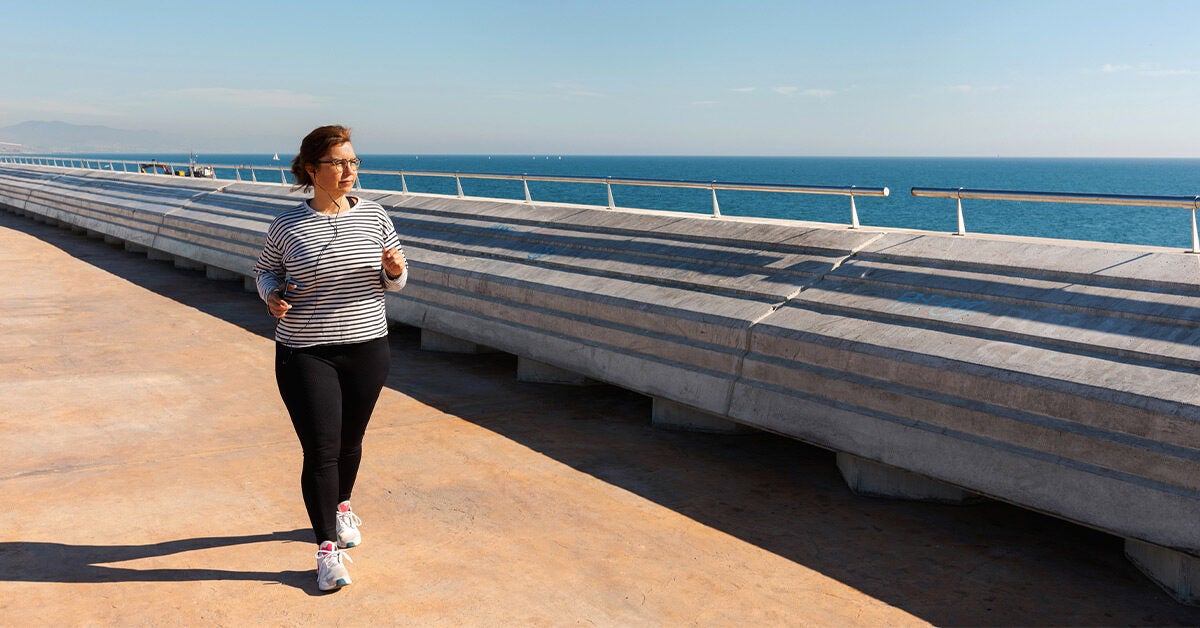 How Moderate Exercise Can Help Your Heart Health

Engaging in moderate physical activity more often during the week could help many Americans lower their risk of heart failure, a new study has found.

Moderate exercise includes such as walking at a moderate or brisk pace, cycling, yoga, tennis, basketball, dancing and recreational swimming.

Additionally, they found that the benefits of vigorous physical activity were greatest when people also engaged in moderate-intensity activities during the week.

This study is part of other showing the link between regular exercise and improved heart health – including a lower risk of heart disease, stroke and cardiovascular disease.

But by using activity monitors to track how often and how people moved during the week, the researchers were able to tease out distinct heart benefits from moderate and vigorous physical activity.

In the study, published August 29 in the journal researchers analyzed data between 2013 and 2015 on more than 94,000 adults enrolled in the British Biobank, a large research database that includes health information for half a million adults in the UK.

For the current study, participants wore a wrist-based activity tracker for seven consecutive days, 24 hours a day. This provided researchers with information about the intensity and duration of people’s physical activity.

None of the people involved in the study had been diagnosed with heart failure or had ever had a heart attack.

The researchers followed the participants for an average of 6.1 years after measuring their activity levels, to see how many people were diagnosed with heart failure during that time.

occurs when the heart does not pump blood as well as it should. This can cause blood to pool, causing fluid to build up in the lungs, making it difficult for a person to breathe.

About suffer from heart failure, with the condition contributing to more than 379,000 deaths in 2018, according to the Centers for Disease Control and Prevention.

The new study suggests that regular physical activity may reduce the risk of developing heart failure.

Researchers found that people who got 150 to 300 minutes of moderate physical activity per week had a 63% lower risk of heart failure.

Those who logged 75 to 150 minutes of vigorous physical activity per week had a 66% lower risk of heart failure.

Both of these items were for people who engaged in little or no moderate-to-vigorous physical activity.

These amounts of physical activity are the minimum recommended by the 2018 .

John Schuna Jr.PhD, an associate professor in the College of Public Health and Human Sciences at Oregon State University in Corvallis, Oregon, said much research on the protective effects of physical activity against cardiovascular disease has focused on acute conditions such as as heart attacks and strokes, and related deaths.

But “this is truly the first investigation showing that objectively measured physical activity consistent with current guidelines for aerobic activities significantly reduces the risk of heart failure,” he said.

The study results also showed that for moderate and vigorous physical activity, some heart-related benefits appeared even at low levels of activity.

“These results indicate that every physical movement matters. A leisurely 10-minute walk is better than sitting down and doing no physical activity,” study author Frederick K. HoPhD, a lecturer in public health at the University of Glasgow in Glasgow, Scotland, said in a Press release.

However, “if possible, try to walk a little faster, which increases the intensity and potential benefits of the exercise,” he added.

The results also suggest that going beyond the minimum recommended level of moderate physical activity may offer better protection against heart failure.

The researchers found that the risk of heart failure continued to drop for moderate levels of physical activity of up to 600 minutes per week. After that, the benefits plateaued.

Some people choose vigorous exercise because they can get a more intense workout in less time. But the results of this study suggest that vigorous activity alone may not be enough to provide the most benefits to the heart.

The new study is observational, so it cannot prove that certain patterns of physical activity directly reduce the risk of developing heart failure. But this is part of a growing body of research on the .

Another limitation of the study is that the majority of UK Biobank participants are white, so further research will be needed to see how physical activity affects the risk of heart failure in other groups of people.

Overall, the new study supports the 2018 recommendation that people should “move more and sit less throughout the day” – especially when engaging in moderate to vigorous physical activity.

Exercising at these intensities has been shown to be most beneficial for heart health and other aspects of health.

How people meet the guidelines can be done in different ways, with any number of physical activities.

“To safely achieve these goals, individuals can choose any combination of moderate- or vigorous-intensity activity that they are comfortable and familiar with,” Schuna said.

One of the most recommended activities is walking, he said, which carries a low risk of injury.

Additionally, “it’s an easily accessible activity for people of all ages and disabilities,” he said, pointing out that older adults with disabilities are often able to walk successfully.

There are also many moderate physical activities that you may not consider “exercise”, such as gardening and yard work, certain types of household chores, playing with children, and shoveling snow. .

Physical activity is also appropriate for people who already have heart disease, although people with heart disease — or other medical conditions — should check with their doctor before starting any new exercise program.

“Physical activity is important before and after the onset of heart disease,” said Dr. Eugene C. DePasqualecardiologist at USC’s Keck Medicine, “because it’s been proven that if you exercise after a or after developing heart failure, it can actually help improve your long-term success.

But to get there, you’ll first need to develop a habit of regular physical activity, which is often the biggest challenge for many beginners.

Schuna said a lot of research has been done to try to understand what helps people keep exercising – so far without a “quick fix”.

Also, what motivates one person to cycle to work every day may not help another person get to the gym in the morning.

However, Schuna said one thing that has been shown to predict whether people will stick to their physical activity regimen is social support.

“People who are surrounded by friends and/or family members who are socially supportive of physical activity…will tend to be more successful at following regular exercise and physical activity programs,” he said.

These support people may be physically active themselves, he said, or they may simply continue to encourage you to keep moving throughout the week.

Alex and Ani have a $17.5m loan as they seek post-bankruptcy growth

What shower temperature is best for post-workout recovery?