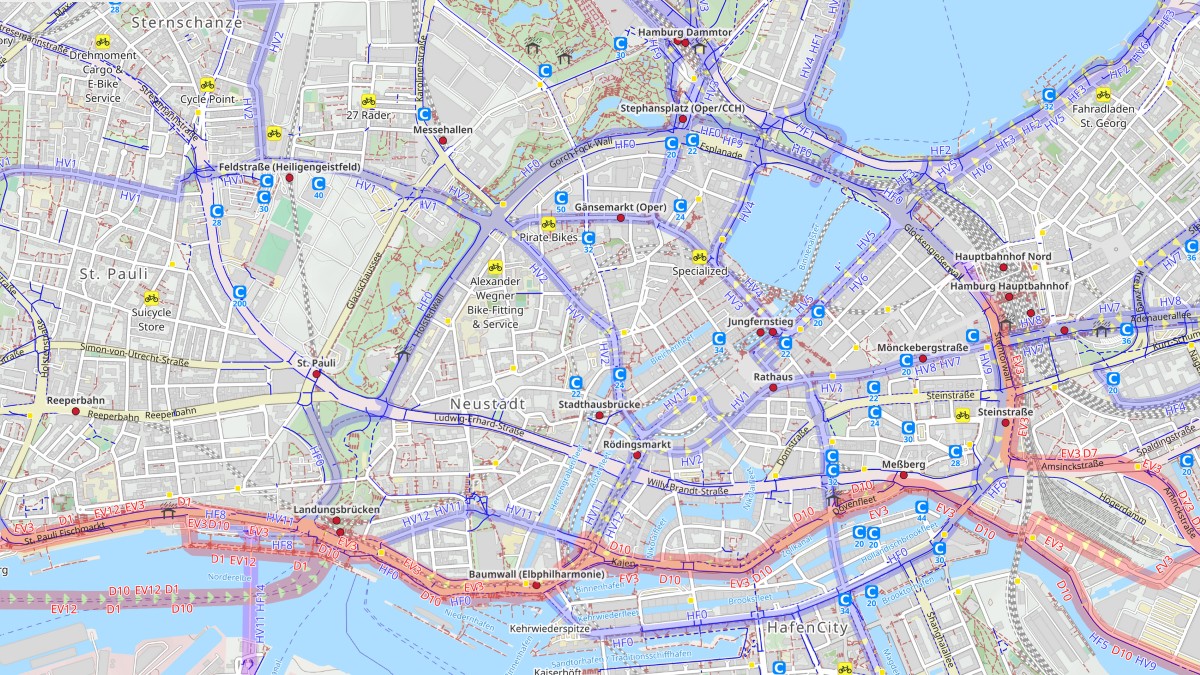 Existing methods, such as in-person audits and various types of high-tech sensors, are rather laborious, resource-intensive, and tied to a specific place and time. Therefore, the comparability of the data is insufficient at European level. However, the solution to get the data we need may already exist: OpenStreetMap (OSM).

More and more players see OpenStreetMap – also known as the “Wikipedia of Maps” – as an alternative to commercial or authoritative data. OSM was founded in 2004 in the UK with a mission to create a set of free and editable global geographic data. Theoretically speaking, anyone can add, modify and extract OSM data, and many different users do this, including route planners, local authorities and researchers. However, the reliance on volunteers for user contributions also results in OSM’s first limitation: there is no quality control in place. Therefore, despite stringent tagging guidelines, the data is not always the most consistent.

The taxonomy of cycling infrastructure – such as what is understood as a cycleway versus a cycleway – can vary depending on the local context. While the challenge of ensuring consistent definitions for cycling infrastructure may go beyond OSM, the mapping community is making great efforts to standardize its marking procedures, perhaps making OSM the source of internationally comparable data to date.

Naturally, not all corners of the world are mapped with the same level of detail, but in general, urban areas in Europe are mapped in great detail. In fact, in some areas, OSM data has proven to be more complete, accurate and up-to-date than local authority data; for example, in OSM, cycle paths can include markers on surface material or lane width. It is precisely this rich and open data that constitutes OSM’s potential for advancing cycling-related research and advocacy work.

In the ideal scenario, government data and OSM data would be better aligned and integrated – something that is already happening in some cities. The city of Warsaw, Poland, provides data on cycling infrastructure to OpenStreetMap; while the migration of the largest urban cycling data collection project to date – Transport for London’s cycling infrastructure database (visualized by CycleStreets) – to OSM is also underway.

How can OSM data be used?

A number of projects use OpenStreetMap to assess cycling networks. For example, PeopleForBikes’ Cycling Network Analysis (BNA) measures how well a city’s cycling network connects people to the places they want to go via low-stress connections. The network is built based on OSM data and other public data sources, and default assumptions are applied in case of missing data. BNA’s scoring system was used to identify gaps in the existing network, to decide where to allocate funds, and to make comparisons over time and space.

CycloRank makes a much simpler comparison of cycling infrastructure to the total length of the road network. The interesting addition is the weighting of the infrastructure according to the distance from the center, with the assumption that the cycle offer in the center is more valuable than in the periphery.

Screenshot of the CycloRank map of the cities compared (Source: mlumiste.com/projects/cyclorank)

CicloMapa of the Union of Cyclists of Brazil (UCB) and the Institute of Transport and Development Policies (ITDP Brasil) is an open platform that aims to increase the visibility of cycling infrastructure (or lack thereof) in Brazilian cities, in order to influence public policies. The user-friendly platform visualizes OSM cycling data and relevant statistics and is directly integrated with OSM editing software. To complete the tool, they have also created several tutorials in Portuguese on OSM editing, collaborative mapping and field surveys.

Another project that also features direct integration with OSM editing software is CycloFix. This project originated during a summer coding program and received funding from the regional government, with the aim of mapping, displaying and integrating cycling infrastructure and relevant points of interest in the Brussels-Capital Region, a place known for its high levels of bureaucracy and political fragmentation. Via the MapComplete mapping tool, each user – regardless of their technical background – can add data directly to OpenStreetMap.

Screenshot of the CycloFix map, including information on cycling facilities (Source: cyclofix.osm.be/map/)​

GrowBike by Associate Professor Michael Szell and colleagues at ITU Copenhagen (2021) is an interactive data visualization platform that explores how to grow a cohesive bicycle network from scratch in 62 cities around the world. The platform also allows you to compare synthetic networks with your existing cycling network, which tends to be very fragmented. It is important to note that these are small but targeted investments that can effectively connect a cycle network; it’s not about the length, it’s about how you grow it.

The ECF thanks the OpenStreetMap community for their contributions. If you know of other projects related to cycling data based on OpenStreetMap data, do not hesitate to contact ECF.