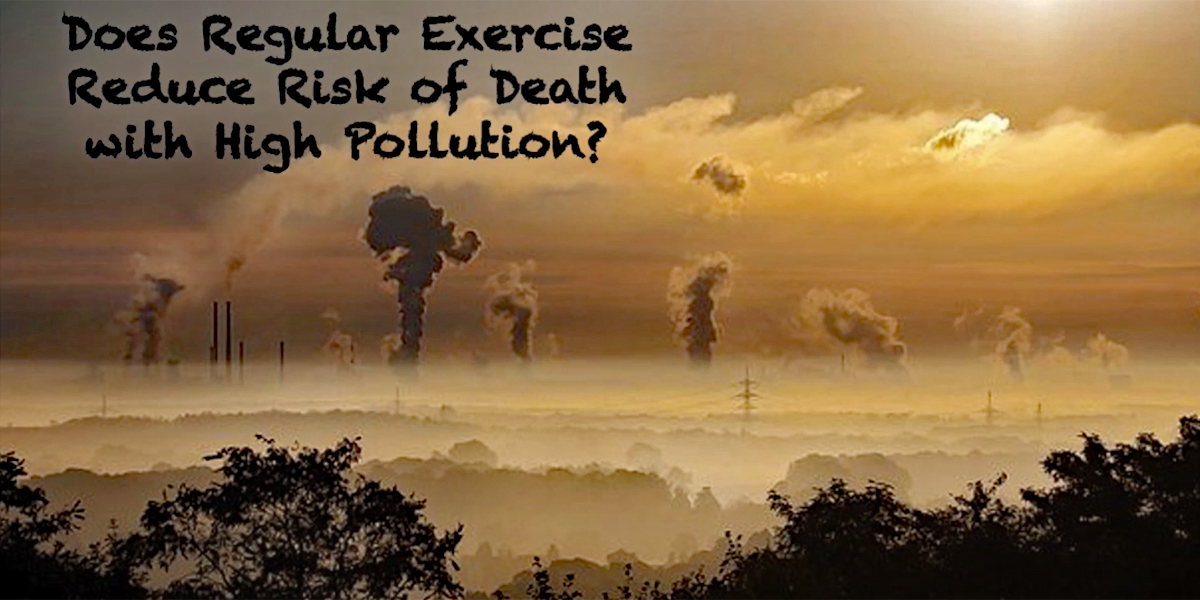 We exercise for many reasons, from the short-term impact of endorphins to the long-term promise of healthier aging. Can any of them be a protection against higher mortality risks during periods of high pollution?

Given our increasing urbanization and continued reliance on fossil fuels, coupled with global warming, pollution levels have increased in many parts of the world. Big cities and smog alerts are often thought of when it comes to pollution, but rural settings are not immune. Look at the dust blowing during the Strade Bianche or Paris-Roubaix, and the same thing happens with the winds blowing over the topsoil of agricultural areas.

The challenge for cyclists and other outdoor athletes is that we breathe a lot of air during exercise, from resting ventilation of 5-10 L/min to over 100 L/min during intense exercise. This creates a much higher pollution load that our bodies have to deal with. Additionally, we generally switch to primarily oral (mouth) breathing above about 35 L/min, which reduces any filtration of our nasal passages. Additionally, athletes breathe deeply during exercise, which means we are likely drawing pollutants deeper into our lungs.

We know that exercise has a multitude of overall health benefits through just about every system in our body. At the same time, we often train in polluted environments. So a question becomes: “Can regular exercise protect us from sudden periods of heavy pollution? »

We know that even moderate levels of exercise can provide many health benefits. Can any of them reduce the risk of death during periods of high air pollution?

In today’s episode, we’ll explore a 1-year study of natural deaths in Hong Kong and see if there’s a relationship between pollution levels and death rates among those who never did. exercise and those who exercised moderately.

Air pollution is becoming a serious problem in many parts of the world. Often we think of it as a big city problem caused by traffic, heavy industry and coal-fired power plants. However, geography can also contribute, such as mountain ranges that can trap airflow and cause regional pollution spikes even if the source is far away. Rural areas can also experience high levels of wind pollution which stirs up dust and soil. Some pollutants like ozone can also increase during summer and heat waves, as it is a direct chemical reaction between sunlight, heat and pollutants like nitrogen oxides and compounds volatile organics. There is no longer any doubt that moderate exercise can provide a host of health benefits. Could one of these benefits be the reduced risk of death during periods of high pollution?

This question has been investigated by a research group in Hong Kong.

To do this, they took data from a large project that tracked more than 24,000 cases of natural deaths – those not counting accidents such as car crashes – in Hong Kong during the calendar year 1998, accounting for 78% of all natural deaths in people over the age. 30 that year. Through interviews with close relatives, their level of physical activity was categorized as “exercise” if they exercised at least once a month in the 10 years prior to death. This represented about 30% of the group. Information was also collected on education level, socioeconomic status, smoking history and medical history. Pollution levels, temperature and humidity were tracked for each day.

First, what were the characteristics of regular athletes? In general, they were more likely to be female, wealthier and better educated, smoked less, were healthier in the months and years before death, and also lived longer. This aligns with much of the existing literature regarding exercise in different population studies around the world. How has exercise affected death rates during pollution spikes? Each group was divided into people over 30 and over 65. Among non-doers, death rates increased with increased particulate matter and ozone in those over 30. In those over 65, death rates were higher with these two pollutants and also higher levels of nitrogen dioxide. In contrast, with athletes, an increase in death rates was only observed in those over 30 with increased sulfur dioxide. These patterns held true even when the different groups were matched for socioeconomic status, smoking status, and medical history.

Studies like this add to the overwhelming evidence of the benefits of an active lifestyle. It is important to note the extremely low threshold for being exercise in this study, at only once a month. It really emphasizes that even a little can go a long way. Although the actual exercise or intensity was not tracked, the authors speculated from previous studies that it was primarily walking or low-impact exercises like tai chi, again emphasizing that we are not talking about extreme levels of activity or intensity. But if you live in a polluted environment, there are things you can do to reduce your risk of exposure to pollution while you exercise. You can avoid higher pollution by exercising early in the morning or avoiding peak hours. You can also exercise in parks or away from traffic, or exercise indoors if there is good ventilation. Finally, breathing through your nose rather than your mouth, and also wearing a mask, can help filter pollutants from the air before they reach your lungs.

Like PEZ? Why not subscribe to our weekly newsletter to receive updates and reminders on what’s cool in road cycling?