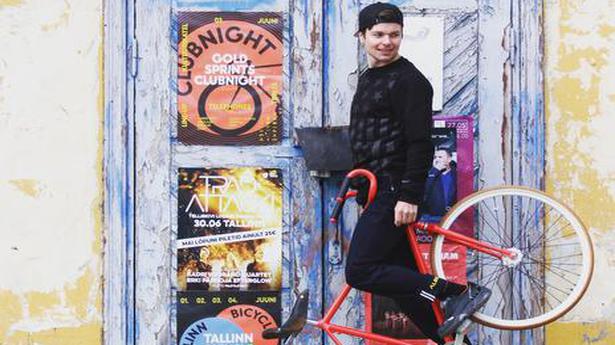 David Schnabel’s eyes light up when he talks about his favorite sport: cycling. â€œDo you know that my bicycle saddle is about 25 years old? This is from my first bike, which I had when I was eight years old. However, the frame has changed over the years, â€says David, who can do more than just ride a bike. Eight-time world champion in artistic cycling, David is in town at the invitation of Goethe Zentrum Trivandrum, to inspire young people to embrace sport and cycling as a lifestyle.

So what exactly is artistic cycling? â€œIt’s a form of competitive indoor cycling where athletes perform tricks for points on specialized bikes. It’s basically bicycle gymnastics. Sport involves physical exercise and difficult movements on a bicycle. Although it is not a popular sport, it has a dedicated following in Europe. ”

To perform the delicate balancing and receding figures, artistic cyclists use fixed-gear bikes. The handlebars are similar to that of a racing bike, but upside down in comparison, giving cyclists some leeway. â€œThe front wheel should also be free to make a 360 turn,â€ says David, who performs tricks on his bike, from squats and jumps to saddle racks and antics, without batting an eyelid.

The 33-year-old from Niedernberg, Germany, started artistic cycling at the age of eight. Sportsman, David says it was his father, Alfons, who introduced him to the sport. “He told me about it in passing and I was fascinated.” David quickly started training with an instructor. “I trained with him for two years until my dad resumed my training.” Although his father was not trained in artistic cycling, he â€œlearned on the job and trained me well in this sport,â€ explains David.

David remembers riding his bike twice a week during school days and every day on vacation. â€œI also played other sports like wrestling and table tennis,â€ says David, who also plays the trumpet and drums. According to the young cyclist, while some bike tours are learned quickly, others take around two years to be perfected.

Cycling is something he loves because he meets “a lot of nice people” when he rides a bike. He realized that artistic cycling was something he would like to practice at the age of 18. “My heart told me this was the right sport for me and I didn’t look back.”

Ask him about the lack of protective equipment when playing sports and he laughs, saying, â€œI have suffered more injuries in other sports than on my bike. I only fell off my bike once and it was because I was not focused during a stunt. Concentration is a must when you are on the bike. In addition, it would be difficult to perform a handstand on the bike with a helmet. “

While there is no specific diet to follow as an artistic cyclist, David says he now eats lighter meals. â€œI feel healthier and I also feel like I can balance myself better on my bike. “

David has represented Germany nine times at the UCI Indoor Cycling World Championships and won eight gold and one silver medals; 25 countries participate in the event each year. â€œWho knows, maybe one day India will send representatives to the event,â€ says David, adding that he no longer participates in the competitions.

â€œI had a good run on the competitive field and have enough world titles to my name. Right now, I want to encourage and train young people in this sport, â€explains the cyclist, who currently teaches artistic cycling to pupils aged 12 to 16 at theâ€œ local club â€in his hometown.

David will be holding a workshop with students from Christ Nagar School, Kowdiar, today. Watch a performance by the artist at Manaveeyam Veedhi on October 7 at 7 p.m.