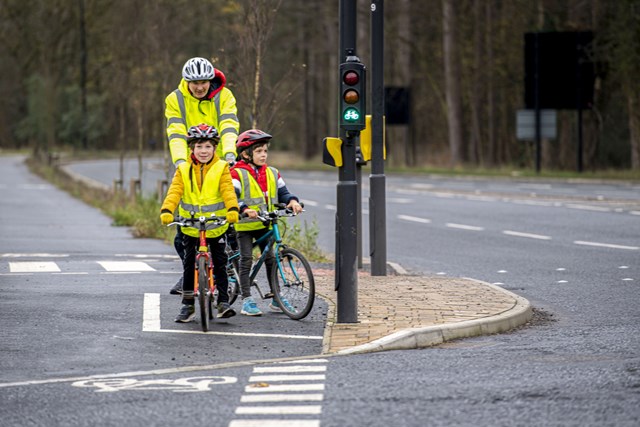 The East Leeds Orbital Route (ELOR) scheme together with other funding has provided substantial cycling infrastructure from King Lane (north west) outward where the new ELOR will connect to the existing A6120 outer ring road (Redhall) .

The volunteers who appear in the new video are all locals who use their bikes for daily activities such as errands, school trips and commuting. Some were new to cycling at the start of the Covid-19 pandemic and decided to try cycling due to the drop in traffic during the lockdown. The separate infrastructure shown in the film at the Moortown roundabout provides safe crossing points away from motor vehicles.

The region’s cycling infrastructure will be improved by connecting existing cycle paths and creating separate cycle paths. Pedestrians will also benefit from new walking routes and safer crossings. All this with the aim of making sustainable travel more attractive by improving public transport, walking and cycling connections and thus contributing to the fight against the climate emergency.

The project is now in its final stages with the construction of a 7km route linking the existing ring road at Red Hall to Thorpe Park Junction 46 of the M1, a causeway with pedestrian, equestrian and cycle facilities.

The program is expected to complete in fall 2022. For more detailed plans, visit the website.

“It’s great to see such positive feedback from people about their bikes through this program. We know that safe and secure bike paths can encourage more and more people to get on their bikes.

“We plan to create an additional 100km of cycle paths in the short term, but we have the ambition to achieve 800km (500 miles) in total to create a complete cycle network.

“Once the ELOR cycle is complete, the pedestrian and equestrian infrastructure will provide a safe and family-friendly transport option for thousands of Leeds residents living in East Leeds.

“Council continues to work with the community, landowners and developers to ensure the development will enrich their options for active travel. 75% of the project footprint will be landscaping, open public spaces and see improvements to the local environment.

“It is important that the council continues to provide good quality and separated cycling, walking and equestrian infrastructure for the benefit of the people of Leeds. For short journeys, choosing to walk or cycle instead of driving will reduce congestion on the transport network, remove carbon emissions and support the health and well-being of Leeds residents.

In addition to new active transport infrastructure, the ELOR scheme will plant around 35,000 trees to support Leeds City Council’s goal of becoming carbon neutral by 2030.