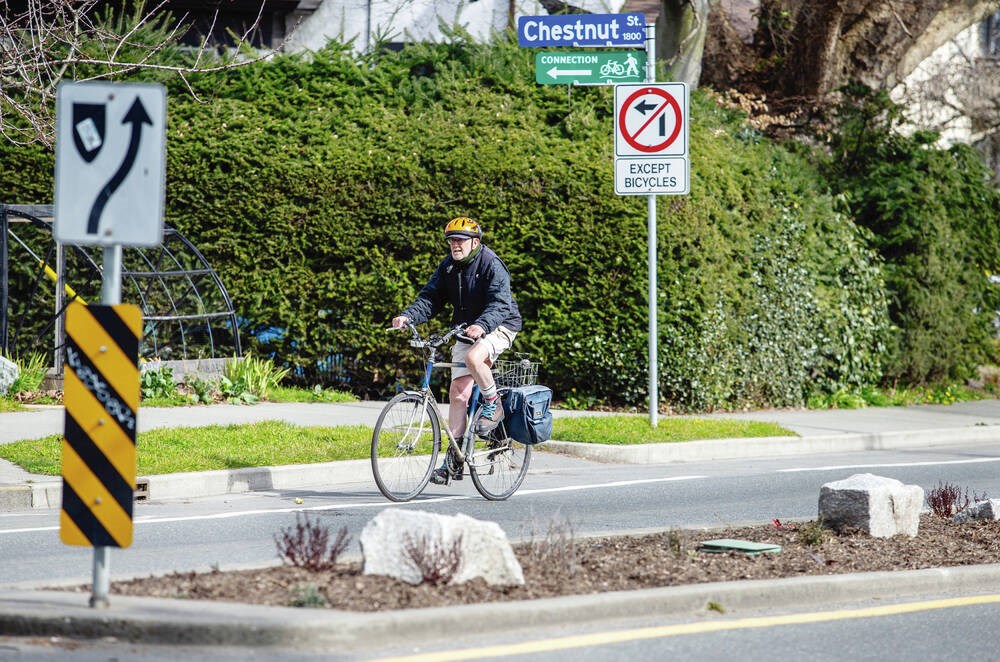 A comment from a Victoria resident who, at 74, is among the 10% whose main mode of transport is cycling.

In any attempt to level the playing field, in this case for motorists and cyclists, the issue of fairness is a key consideration.

A few questions for council candidates and voters:

• While using their preferred mode of transportation, are some motorists in Victoria being unfairly inconvenienced by the new cycling infrastructure?

• Are some current and potential cyclists in Victoria unfairly prevented from using their preferred mode of transport due to the lack of safety provided by a connected network of cycle paths?

• Until all corrective traffic calming measures are complete, is the temporary disruption of increased volume on surrounding streets in the neighborhood worth the ongoing benefits of linking the Richardson Bike Path into an infrastructure bikeable for all ages and abilities (AAA)?

To a large extent, the answers depend on the extent to which cyclist safety, driver inconvenience and neighborhood disruption are necessary to reap the benefits of increased cycling through safe infrastructure. Benefits include reduced noise and harmful air pollutants, better physical fitness and mental health, saving money on gas and car expenses, greater equity for Victorians who do not have car and reduced risk of injury to cyclists. For motorists, each potential bicycle driver means one less car on the road and one less competitor for parking spaces.

The required cycling safety is the 32 kilometers of continuous and connected AAA street cycling infrastructure that the City of Victoria has committed to complete by 2023.

It consists of a network including physically separate bike lanes (like Wharf and Fort), shared neighborhood bike lanes (like Richardson and Vancouver), and off-street trails like the Dallas Road multi-use trail. Esquimalt and Saanich are installing similar infrastructure. When completed, 95% of the city of Victoria will be within 500m of a AAA cycle path.

As for the inconveniences for drivers, there is the loss of traffic lanes, such as on Fort, and some through roads such as Richardson and Vancouver. Some journeys on alternate routes, such as Cook Street, Quadra Street, Oak Bay Avenue or Fairfield Road may take longer depending on the day and time.

Given the months it takes motorists to adjust to such changes, the increased traffic disruption on some nearby streets is now around the Richardson bike path.

The Great Unknown: If you build it, will they come? Simon Fraser University’s six-year study of cycling infrastructure in Victoria, Kelowna and Halifax (www.sfu.ca/ibims.html) suggests they will; and that there are tens of thousands of potential cycling converts, and more cyclists, living in the four central municipalities of Victoria, Esquimalt, Oak Bay and Saanich if they have the proper infrastructure.

Of the more than 200,000 people aged 18 or over in this region, 70% have one or more adult bicycles in their household, 11% have an electric bicycle and more than 50% want to get around by bicycle more than they currently do.

Unfortunately, 80% don’t feel comfortable on a busy main street without some form of cycling infrastructure. In 2021, only 53% had used a bicycle in the past year, while a third said they were interested in cycling… but worried.

Because conversion happens one person at a time, where current and potential cyclists do what they say they would do in the SFU study if they had safe infrastructure, it will still take many months to determine a final number on modal split change. Indeed, years, as the number will include a good percentage of the region’s 20% increase in population over the next 20 years.

Interim measures of the degree to which new AAA infrastructure has changed fashion share in the city of Victoria are encouraging. For example, ridership on the Richardson bike path fell from a daily average of 389 bikes in the fall of 2019 to 701 in September 2022. Prior to the installation of the infrastructure on Wharf Street, ridership stagnated at around 600 per day, but now averages 1,600 rides per day. daytime.

So, has the playing field been evenly leveled? We won’t know for sure for quite a while.