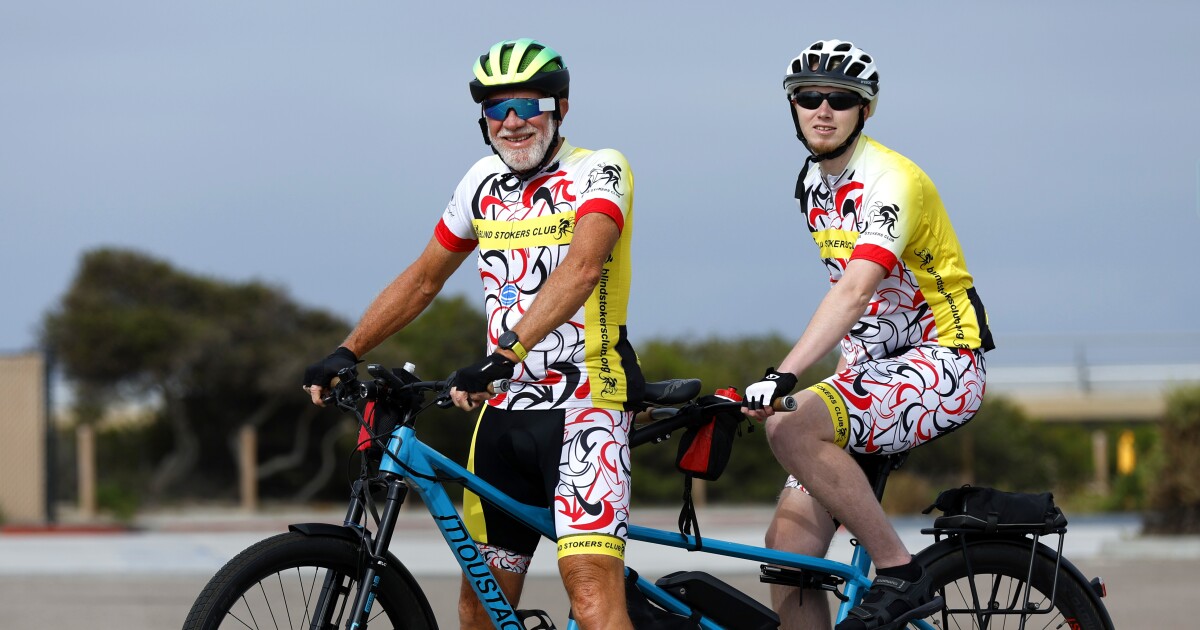 In his 22 years coaching football at Mt. Carmel High School, Mark Green says he’s never seen a better high school player than Michael “Grizzy” Griswold, who graduated in 2013 with first-team All-CIF honors and was drafted to UCLA on a Division I football scholarship.

But on July 28, 2014, the 19-year-old second was diagnosed with stage 3 malignant cerebral melanoma. Doctors warned the family that his chances of survival were slim.

But with the support of his oncology team, family, general health and religious faith, Griswold survived, but at a cost. The 14 tumors in his brain and the effects of his illness and aggressive treatment left him blind and with cognitive, memory and speech problems. Grizzy survived, but he will never play football again.

Then, a few years ago, Green — who has remained close to Griswold and his family — read an article in The San Diego Union-Tribune about the Blind Drivers Club. The San Diego-based recreational tandem cycling club pairs sighted captains to steer from the front seat with blind and visually impaired riders in the back seat who provide the bike’s pedal power (or “loading”). The Blind Stokers Club, which has 100 members, has been named Bike Club of the Year 2021 by the San Diego County Bicycle Coalition.

With the help and training of Blind Stokers founder and director Dave White and Green’s support and friendship, Griswold gradually returned to a regular exercise routine in 2020. And when White felt Griswold was ready for long distances last year, he paired Griswold with his current tandem cycling partner, Ron Kelly, a Rancho Santa Fe triathlete who now rides Griswold at least 35 to 40 miles a week.

Now 27, Griswold said he loves everything about tandem cycling, including the socializing he enjoys with Kelly and Kelly’s triathlete pals, known as “the Amigos”. He is also grateful to be alive.

“I like the wind in my hair. I like to clip and unclip my shoes in the pedals. And I like people, because I’m a social butterfly,” he said. I’m missing, but things are going really well. My parents told me that at some point my heart stopped and they pronounced me dead. So I’d rather be here than dead in a ditch.

His cycling partner Kelly, who joined the Blind Stokers about a year ago after buying a new tandem e-bike, said he and Griswold are a good team.

“He and I have a lot of fun, and he keeps me on my toes,” Kelly said. “He is a positive person who is always in a good mood. For him, every day is a big day.

Kelly said seeing the club’s effect on the visually impaired community has also been rewarding.

“There are a lot of caring people at this club,” Kelly, 70, said. “Seeing the difference it makes in people’s lives makes me grateful to be involved. I’ve never been around people who are blind or partially sighted before. From my perspective, it takes a lot of courage and confidence for someone to jump on the back of a bike and go and make turns when you can’t see where you’re going.

Kelly and Griswold will be among the attendees at Cycling for the view, a 30-hour fundraiser June 25-26 at the University of San Diego. It includes two days of cycling as well as meals, accommodation and activities. It will raise funds for the San Diego Center for the Blind and the Blind Stokers. The all-volunteer Blind Stokers Club uses donations to pay for the refurbishment of tandem bikes, club jerseys and gear, and transportation costs to bring drivers to and from the group’s bi-monthly cycling events.

“We’re proud to be able to make a real contribution,” White said of the club he founded in 2007. “Exercise is therapy for the brain. It’s more than a social connection. Michael and Ron are 40 years apart in age and now they’re best friends.

Michael’s father, Robert Griswold, said his son has always been self-reliant and goal-oriented. It helped him persevere in the fight for his life. Initially, doctors told the Griswold family that if Michael survived his initial treatments, his survival rate in the second year was 2%. They had no information on the survival rate for years three or four.

“When he was told in December 2014 ‘you have terminal, inoperable brain cancer,’ he said, ‘I’m going to beat this.’ That’s been his attitude ever since,” Robert Griswold said.

During Michael’s long hospital stay, including 17 weeks in intensive care, he suffered from pneumonia, a pulmonary embolism, an infection and a heart attack. Eventually, in March 2015, he was released from the hospital to begin relearning basic skills. He now needs full time care.

Green visited the family often over the years, and he and Griswold took walks. But when Green and White of the Blind Stokers took Griswold for a first bike ride in 2020, he was barely strong enough to pedal around the block.

But the experience gave Griswold motivation, and soon he was cycling every day on a stationary bike at the family home in the Santaluz community near Rancho Peñasquitos. Within months, the trio – White and Griswold on the tandem and Green on his solo bike – lengthened their rides around Miramar Reservoir to 5 miles. At the end of 2020, the trio completed the five-city, 24-mile Bayshore Bikeway ride.

Robert Griswold said being part of the club had gotten his son fit, provided him with a new social circle and proved to him that with hard work goals can be achieved. He said his son’s long-term dream is to get married and become a father one day.

Green said he loves seeing how his former captain of the Mt. Carmel varsity football team is thriving, thanks in large part to the Blind Stokers Club.

“His parents kept him socially engaged, but physically he didn’t seem to have a rich existence before,” Green said. “But now he rides a stationary bike at home, walks better and is eager to go for walks. The difference in him physically is incredible. He’s moving better, looking fitter, he’s happy and he has things to look forward to.

To learn more about the Blind Stokers Club, visit blindstokersclub.org.