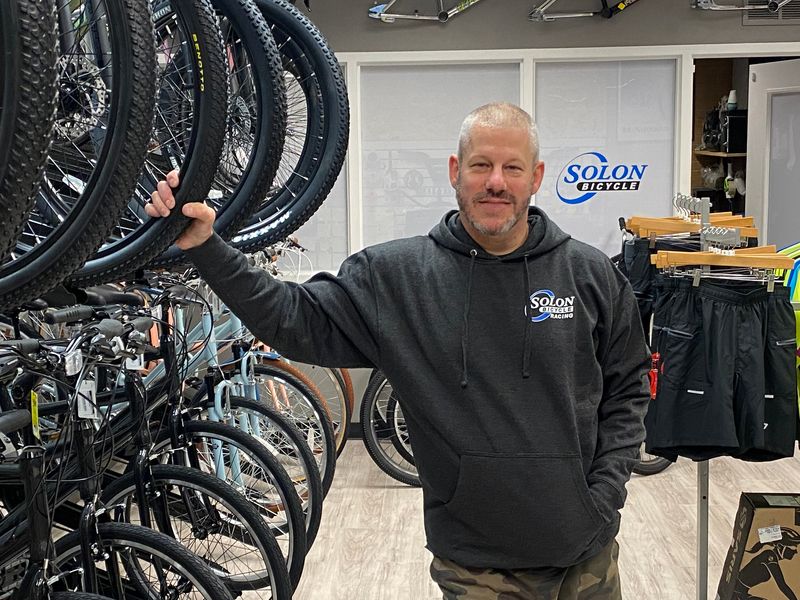 Advances on cycling infrastructure are everywhere in Northeast Ohio

Maybe you haven’t noticed – or maybe you’re the type who swears behind the windshield with images of tiny flashing red lights burning in your brain – but there are more cyclists on the road. than just a few years ago.

And around northeast Ohio, like much of the rest of the country, there are more places to ride and more on the way, from dedicated bike paths through bucolic environments or lanes on existing roads dedicated to cyclists.

They are more than just prolific and pleasurable pandemic pedal pushers. Ask those who work on building cycling infrastructure, and even some developers in the area, and they’ll tell you that good cycling infrastructure is key to attracting the best and brightest new residents and employees, which means that it is also essential for retaining and rebuilding populations and driving growth.

â€œThis indicates that we are a city of the future and that we are ready to welcome a whole new group of knowledge workers,â€ said Akron developer Tony Troppe. “It’s about creating a greener society. If you’re not addicted to cars today, you’re free.”

Most of the developments in Troppe are in downtown Akron, where almost all of them are within a stone’s throw or easy distance from the Towpath Trail. He says it’s an attraction for him as a developer and as a landlord looking for tenants because his tenants value the amenities.

When asked how many of his developments had dedicated and secure bike storage, Troppe quickly responds, â€œallâ€.

Akron sees cycling infrastructure as an essential part of its plans to rebuild the population. When Akron recently redeveloped its main street in the city center, it significantly widened the sidewalk. It wasn’t just for pedestrians, said Jason Segedy, the city’s director of planning and urban development, on a fall walk through the city.

â€œThis is the bike path,â€ Segedy said, pedaling smooth, pristine concrete without the scent of a traffic threat.

Akron cyclists are somewhat blessed. Segedy is riding, as is Mayor Dan Horrigan, and both are keen to expand the city’s cycling options to attract new, young residents and workers who are perceived – and often claim – to place more importance on fitness and outdoor recreation. look like previous generations.

And while Cleveland has had to fight fiercely for many of its connections to the famous towpath – efforts that many cyclists applaud – the towpath runs through all of Akron almost like a second Cuyahoga river, meandering through the river. town from Cuyahoga Valley National Park and the Merriman Valley to the north and exit from the south side of town in Coventry Township near Portage Lakes.

On top of that, cyclists on the north side of town, as well as places like Stow and Munroe Falls, have the Bike and Hike Trail run by Summit Metro Parks. This system stretches from Alexander Road in Cuyahoga County, through Brandywine Falls and up to the Cuyahoga River in front of Munroe Falls Metropolitan Park. It offers cyclists over 30 miles of road which is almost all paved for bicycles, with no cars and few pedestrians.

It’s not that Cleveland and other cities in Northeast Ohio are coasting. There are signs of recent progress in cycling infrastructure, and further investment plans, across the region.

â€œIt was the summer of the ribbon cuts,â€ said Elaine Price, senior planner with the Cuyahoga County Planning Commission, who highlights recent progress on projects such as several new Towpath connections; the new Cleveland Metroparks Redline Greenway between the RTA Red Line and its Centennial Lake Trail; new trails in Brighton Park near the Cleveland Metroparks Zoo; and new trail extensions at the Brecksville Preserve, among a host of recent improvements.

She’s also excited about other upcoming projects, like a Rails to Trails project to connect the Slavic Village of Cleveland to the roads leading to downtown Cleveland.

Like Price, Sean McDermott, director of planning and design for Cleveland Metroparks, works on cycling infrastructure with many local municipalities, which planners say ultimately hold the key to trail and cycle path development. . He is optimistic about some of the projects he sees on the horizon at places like Lakewood, which is working to improve conditions for cyclists.

â€œThere’s a project going on in Lakewood that’s super cool,â€ McDermott said, referring to plans to build a multi-use trail from the Rocky River Preserve to the Lakewood business district along Detroit Avenue. â€œNot only is it cool, but it helps solve that last mile problem (for bike commuters and multi-mode travelers), because there is a bus stop right next door,â€ and the buses are equipped to transport easily bikes.

McDermott said helping communities find ways to link existing bike paths with others in the area is an important part of his work. It is also essential to develop a cycling infrastructure that will provide cyclists with transport and leisure options throughout the region.

â€œAt the moment, we are working with Cuyahoga and Garfield Heights on this exact scenario,â€ McDermott said, referring to work underway to connect the Garfield Park reserve to the towpath.

Cycling advocates are particularly excited about a planned project for Lakewood’s Clifton Avenue Bridge that connects the city to its neighbor, Rocky River.

Price said the county is preparing to install a protected bicycle lane on the north side of the bridge next year, removing a lane of motor traffic and replacing it not only with the bicycle lane, but with rest areas, plantations. , benches and “selfie windows”. “where the views of the Rocky River below are the best.

â€œThis bridge is going to be a destination,â€ Price predicts.

But if northeast Ohio is to continue its progression and follow other regions, and connect to other national trails, there is still a long way to go, cycling advocates say.

Sirkin said he was encouraged by the recently announced developments, including some in his hometown.

SOM Center Road’s Solon Cycle Path (Route 91) at the city’s eastern border with Bainbridge is expected to be built next year, city engineer John Busch said. He said the city had already secured funding for the project.

On top of that, Busch said, Solon is set to create cycle paths along Aurora Road next to Solon’s community center and park. Although neither of the two projects have high mileage, Busch said they will help cyclists move and switch between cycle lanes. He also does not think they will remain isolated.

â€œIt will be a good foundation for the city to build on and provide additional connectivity in the future,â€ Busch said.

It looks like a well tuned drivetrain for Sirkin from Solon Bikes.

â€œSounds perfect. We want to take family walks with clients – walks without Lycra,â€ Sirkin said with a chuckle. “I think the city as a whole is excited, and there are definitely a lot of new riders out there now.”

â€œOur biggest push is really around the quality of the infrastructure. You look at other cities that cycle, and they don’t just make painted lines for cycle lanes – they make protected cycle lanes, â€said Jacob VanSickle, executive director and co-founder of the Cycling Advocacy Group Bike Cleveland.

Such features are necessary because too many cyclists are being killed on the roads, said Caitlin Harley, responsible for safe routes to school and active transportation at the Ohio Department of Transportation.

â€œWe have seen the number of pedestrians killed over the past few years really increase, so there is a new focus on pedestrian and bicycle safety,â€ Harley said, noting that the number of bicycle fatalities has increased from 11 statewide in 2019 to 14 in 2020.

â€œProviding a dedicated space is the # 1 way to prevent these kinds of accidents with people riding bicycles,â€ Harley said.

Bike Cleveland is also excited about the upcoming development of the $ 6.1 million Lorain Avenue bike path, which will run from West 20th Street to West 65th Street.

â€œWe’re really excited about the city’s work around ‘Vision Zero’, which is a strategy to eliminate fatal crashes along Cleveland’s roads. It’s exciting because it’s a culture shift in what is about how the city views road fatalities, â€says VanSickle.

Cyclists and their supporters say things are improving – fast, in some pockets of the region. They hope that the bicycle will continue to gain in popularity not only as a means of recreation, but also as a means of transportation.

Not feasible for a city like Cleveland? Don’t tell them that. They will point to cities like Minneapolis, known for its excellent cycling features such as ubiquitous protected lanes and trails.

â€œIt’s only a seasonal option because we figured it was a seasonal option,â€ said Price, of the Cuyahoga County Planning Commission. â€œMinneapolis actually invests money in snow clearing its trails during the winterâ€¦ because people use them. “