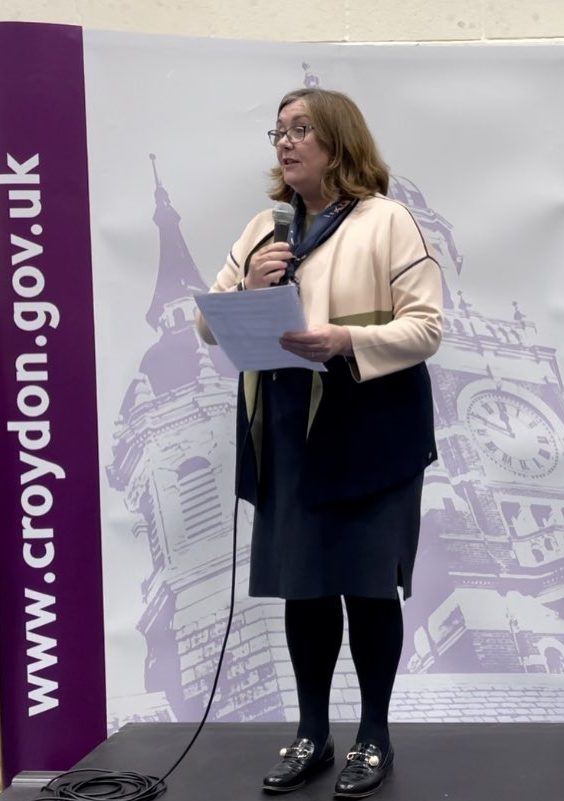 “We are not on the verge of bankruptcy,” says Kerswell

CROYDON IN CRISIS: The CEO of the £192,000 council has told a local government magazine she has a solution to the latest financial crisis: more borrowing. By STEVEN DOWNES

The Borrower: Council CEO Katherine Kerswell believes there is a magic money tree

An 11 a.m. decision on a loan from the Department of Leveling Down will allow Croydon Council to continue with its budget-setting meeting on Monday night after all.

But while Katherine Kerswell, the £192,000-a-year chief executive, co-wrote a report for councilors ahead of tomorrow night’s key meeting which makes clear her council is at real risk of having to issue a second opinion under 114 in just 18 months because he can’t balance his budget, she has given media interviews in which she tries to deny the existence of such a risk.

“We’re not on the verge of bankruptcy,” Kerswell said seemingly very seriously in an interview with the Chronicle of local government released this week.

“We issued a notice under Section 114 previously because we had no alternative – there were no arrangements in place at the time with the government for funding guidelines.”

Kerswell told the LGC that “as a last resort, we could ask for a capitalization loan” – which means even more borrowing from the government, this time to mask the £73million hole in the budget that could appear if auditors play hardball and insist that money from the Housing Income Account should not could not be used – as Croydon did – on adult welfare, children’s services or its IT department.

Auditors have so far refused to sign off on the council’s accounts due to the dispute over how HRA funds were used.

Article 114 revisited: the dire warning of impending bankruptcy in the board’s official report, co-authored by Kerswell, which was presented at budget meetings

In the brief interview with the trade magazine, Kerswell still managed to contradict himself. “She acknowledged that while ‘the risk of a Section 114 is real,’ the LGC reported, “this would not materialize because we have solutions available on the table”. That is to say even more loans.

It has been just 12 months since the government agreed to a £120m bailout for Croydon, the biggest bailout in local government history.

It was the multi-million pound tranche of public money from the coming year that caused some degree of panic in Fisher’s Folly, as Michael Gove’s Department for Levelling, Communities and Housing had no not officially signed the loan. It meant Croydon Council could not balance its budget, as it is required to do by law, with the March 11 deadline fast approaching.

That’s why the board was forced to postpone its February 28 budget meeting and consider further postponements this week.

It was not until Friday that a Conservative government minister finally gave his approval.

What Kerswell described as “the wait for final approval” was caused because, 12 months after his government approved the funding plan, Kemi Badenoch was “absent”.

Kerswell said: “We have been told informally that Kemi Badenoch is out which is why there is a delay in getting him to us.

“We expect the government to say yes to the £50m and to be ‘willing’ to accept the £25m for next year. We can then establish a legal budget on this basis.

In correspondence with the borough’s 70 councilors earlier in the week, Kerswell said: ‘As you may be aware, Croydon Council is due to receive written confirmation from the Government on the funding direction for 2022 -2023 before the full council can vote on the budget and council tax levels for next year. »

“This situation is not within our ability to influence further.”

It is for this reason that emergency dates have been set for March 10 and 11, “to be used only if government confirmation is not received by Monday March 7”.

The government’s dithering and delays and resulting adjournments mean that the finance executive who helped set the budget and write the budget reports, Richard Ennis, should not be available to answer questions: a person named Acting Croydon’s third Section 151 officer in just 12 months, Ennis quit his job last Monday.

Other council business, such as a planning committee meeting scheduled for March 10, also had to be canceled as a result.

“I apologize to all members affected by this,” Kerswell wrote.

“However, by law, we must establish our budget and council tax by Friday March 11, so we only have next week to be able to hold this council meeting…

“I appreciate how unusual these arrangements are and rest assured that your officers, the Improvement and Assurance Group and senior DLUHC officials are working closely together to navigate the decision-making processes in government. .”

It was Friday mid-afternoon that Stephen Rowan, the head of the council’s democratic services, was finally able to issue a “all-clear” by e-mail: “Following previous e-mails, I am writing to confirm that the board has now received formal confirmation from the government regarding the board’s funding direction for 2022-2023.

“On this basis, the budget council meeting will take place as planned on Monday March 7 at 6.30 p.m. and the two emergency dates will be removed from the council’s agenda.”

The Department for Leveling Down meanwhile has not explained why its Improvement Panel, chaired by Tony McArdle, is more than a month late in publishing its latest quarterly status update report. finance and governance of Croydon.

A rare disease diagnosis came too late for this boy, who says he’s not ‘the poor thing’

Is air pollution in the London Underground harming your health?