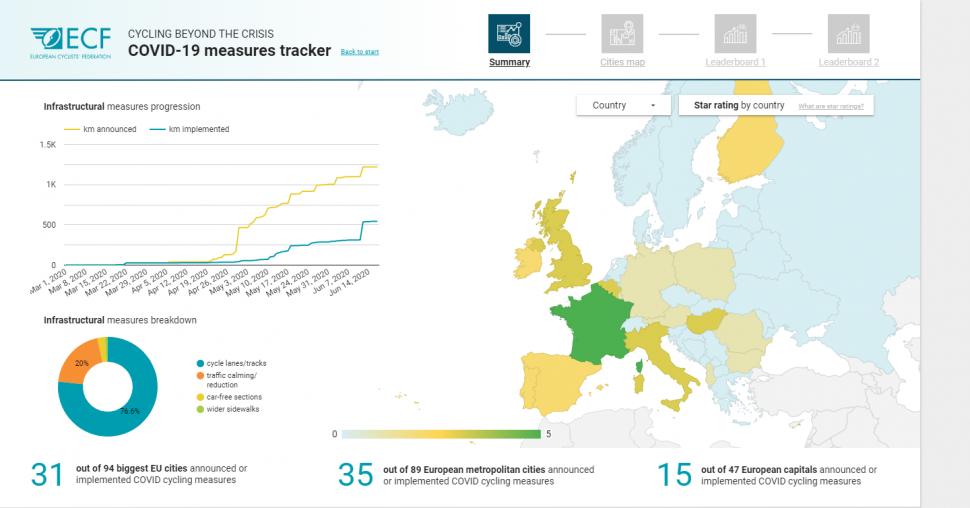 The European Cyclists Federation (ECF) has launchedan online dashboard which tracks progress in countries and cities across Europe in building safe spaces for cycling during the coronavirus pandemic – with Paris, Barcelona and Brussels among the leaders.

As countries began to ease the lockdown, national and local governments in the UK and across continents have invested in active travel both to foster social distancing and to encourage people to move other than by public transport or car.

â€œI find it inspiring that cities, regions and Member States are taking this as a wake-up call,â€ said Morten Kabell, co-CEO of ECF, whose members include cycling campaign groups from across the country. continent.

â€œPeople do not want to go back to stale air and dangerous streets. We are happy to confirm that the data shows that many mayors are taking the right steps to promote cycling and walking. This is the only way we can consider that something positive has come out of this crisis. “

The dashboard summarizes the total mileage of the measures announced and those implemented, as well as the total budget allocated to the promotion of cycling.

Other pages include maps identifying cities where cycling promotion measures have been put in place, and leaderboards showing which countries and cities are making the most progress.

The ECF says that in compiling the data, it “analyzed and cross-checked many sources, including official and unofficial documents, plans, announcements, information and reports from our members on the ground in nearly 300 cities.

â€œOur dashboard tracks the different types of infrastructure, fiscal and other measures, their scope, as well as the announcement and implementation dates. ”

Here are examples of the type of data highlighted in the dashboard:

A total of 1,221 km of new cycling and walking infrastructure have been announced

The additional budget allocated to cycling measures in Finland amounts to 7.8 euros / inhabitant.

Jill Warren, ECF’s other CEO, said: â€œSince the start of the recovery phase, European cities and national governments have allocated at least â‚¬ 823 million to active mobility; more than 1,200 km of cycling infrastructure have been announced and more than 500 km have already been put in place.

â€œThe COVID crisis, while tragic, is also a huge opportunity to accelerate positive change and reshape our cities – and we embrace it. “

The dashboard is supported by SRAM Cycling Fund, whose director, Randy Neufeld, said: â€œThe ECF Tracker shows that bicycle access can improve quickly at low cost. Now cities and advocates can advocate for action in months, not years.

â€œThe dashboard itself was created in just a few weeks, thanks to ECF’s skilled professional team combined with the reach of a network of member groups. “

During the pandemic, cities scramble to expand cycling infrastructure: Big Data can help

11 cycling gear you should wear while on your bike