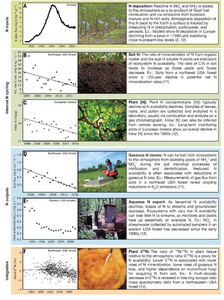 NEW YORK, April 15, 2022 – Since the mid-20th century, research and discussion has focused on the negative effects of excess nitrogen on terrestrial and aquatic ecosystems. However, emerging evidence indicates that the world is currently experiencing a dual trajectory of nitrogen availability. After years of attention to excess nitrogen in the environment, changes in our knowledge have led to new concerns about nitrogen deficiency in areas of the world that do not receive significant nitrogen inputs. nitrogen from human activities. In a new review article, “Evidence, Causes, and Consequences of Declining Nitrogen Availability in Terrestrial Ecosystems,” in the journal Sciencea team of multi-institutional researchers describes the causes of the decline in nitrogen availability and how it affects the functioning of the ecosystem.

“There is both too much nitrogen and too little nitrogen on Earth,” said Rachel Mason, lead author of the paper and former postdoctoral researcher at the National Socio-Environmental Synthesis Center.

Over the past century, humans have more than doubled the world’s supply of reactive nitrogen through industrial and agricultural activities. This nitrogen concentrates in rivers, inland lakes and coastal water bodies, sometimes leading to eutrophication, low oxygen dead zones and harmful algal blooms. These negative impacts of excess nitrogen have led scientists to study nitrogen as a pollutant. However, rising carbon dioxide and other global changes have increased the demand for nitrogen by plants and microbes, and the research team’s recently published paper demonstrates that nitrogen availability is decreasing. in many parts of the world, with important consequences for plant growth.

“These results show how the world is changing in complex and surprising ways,” said Peter Groffman, co-author of the paper and professor at the Advanced Science Research Center of the Environmental Science Initiative at the CUNY Graduate Center. “Our results show the importance of having long-term data as well as focused synthetic efforts to understand these changes and their implications for the ecosystem and human health and well-being.”

The researchers reviewed long-term global and regional studies and found evidence of a decline in nitrogen availability caused by multiple environmental changes, one being elevated levels of atmospheric carbon dioxide. Atmospheric carbon dioxide has reached its highest level in millions of years, and terrestrial plants are exposed to about 50% more of this essential resource than just 150 years ago. High atmospheric carbon dioxide fertilizes plants, allowing faster growth but diluting plant nitrogen in the process. These processes have been observed in experiments that artificially raise carbon dioxide in the air around plants, and there is now evidence that plants in the wild react in the same way.

Nitrogen is an essential element for the plants and animals that eat them. Gardens, forests and fisheries are all more productive when fertilized with nitrogen. If plant nitrogen becomes less available, trees grow more slowly and their leaves are less nutritious for insects, potentially reducing growth and reproduction, not only of insects, but also of birds and bats that feed on them. feed on it.

“When nitrogen is less available, each living thing retains the element longer, slowing the flow of nitrogen from one organism to another through the food chain. This is why we can say that the cycle of nitrogen locks in,” said Andrew Elmore, lead author of the paper and professor of landscape ecology at the University of Maryland Environmental Science Center and the National Socio-Environmental Synthesis Center.

Nitrogen is an essential element for plant growth and its decreasing availability has the potential to limit the ability of plants to remove carbon dioxide from the atmosphere. Currently, global plant biomass stores almost as much carbon as the atmosphere contains, and biomass carbon storage is increasing every year. To the extent that carbon storage by plants reduces atmospheric carbon dioxide, it contributes to the reduction of the global warming potential of the atmosphere. However, decreasing nitrogen availability compromises the annual increase in plant carbon storage by imposing limits on plant growth. Therefore, climate change models that attempt to estimate carbon stored in biomass, including trends over time, must consider nitrogen availability.

“Despite strong indications of declining nitrogen availability in many locations and contexts, the spatial and temporal patterns are not yet well enough understood to effectively guide global management efforts,” Elmore said. In the future, these data could be collated into an annual report on the state of the nitrogen cycle or a global map of the evolution of nitrogen availability which would represent a comprehensive resource for scientists, managers and decision makers.

About the Center for Advanced Scientific Research

About the City University of New York Graduate Center

The CUNY Graduate Center is a leader in public higher education dedicated to enhancing the public good through pioneering research, thoughtful learning, and reasoned debate. The Graduate Center offers ambitious students nearly 50 doctoral and master’s programs of the highest caliber, taught by top faculty from across CUNY – the nation’s largest urban public university. Through its nearly 40 centers, institutes, initiatives, and the Center for Advanced Scientific Research, the Graduate Center influences public policy and discourse and shapes innovation. The Graduate Center’s extensive public programs make it a hotbed of culture and conversation.

The title of the article

Warning: AAAS and EurekAlert! are not responsible for the accuracy of press releases posted on EurekAlert! by contributing institutions or for the use of any information through the EurekAlert system.