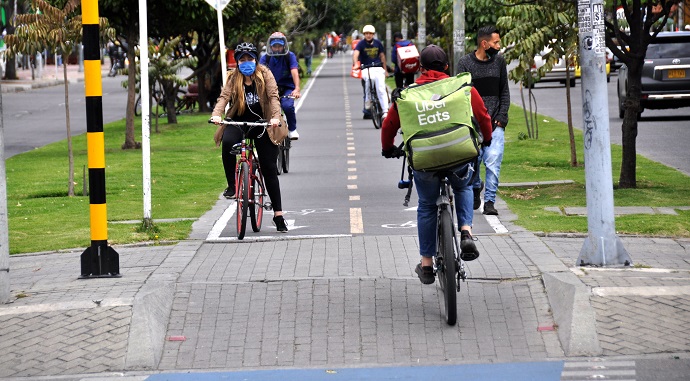 When the COVID-19 pandemic struck, concerns about the transmission of the virus on public transport led many people to choose other mobility options, including cycling. Cycling gained popularity both for leisure and commuting, a trend particularly evident in the United States, Mexico, Colombia, Germany and French. In France, Germany and the United States, the average number of weekly bicycle riders was on the rise 4%, 7% and 20%, respectively, as of 2019.

To adapt to these changing mobility patterns, many cities have introduced new cycle paths. In Latin America, BogotÃ¡ has created a network of 84 kilometers, Lima added 46 kilometers, Buenos Aires announced plans for 60 kilometers and Paris added 50 kilometers. A recent study Analysis of more than 1,000 COVID-related mobility actions by 500 cities, states and national governments around the world from March to August 2020 recorded more than 400 incidences of street space reallocation for walking and cycling.

But not all cycle paths are created equal. Pop-up lanes do not always have the safety features – such as safe speeds, traffic protection, and grid integration – that are needed in the long term. Of the new engagements from BogotÃ¡, Lima, Buenos Aires and Paris, only those from Buenos Aires are designed to be permanent, at the time of this writing – and only 17 of the 60 kilometers have yet been covered.

As cities and countries move in and out of lockdowns, developing permanent and safe cycling networks can be an effective and sustainable solution to maintaining and increasing economic activity while limiting COVID-19 infections. As part of recent virtual training for the Vision Zero Challenge, an initiative supporting 24 cities in Latin America and the Caribbean on the full realization of Vision Zero and the Safe System approach to road safety, we recently explored key considerations for making pop-up cycling infrastructure permanent. Here are three key steps to transform cycling infrastructure beyond the pandemic.

Vision Zero Challenge participants were particularly concerned about how bike lanes might be adapted to the limited road space available in their cities.

Anders Hartmann, Senior Road Safety Advisor for Asplan Viak, presented his Oslo experience in adapting existing infrastructure. Oslo is mostly made up of narrow streets, Hartmann explained, but the city has made room for cycle lanes by converting some two-way streets to one-way and made traffic safer by narrowing lanes and reducing traffic. turning radii to force drivers to slow down. Oslo’s success is particularly significant as it achieved zero pedestrian, cyclist and child fatalities on the roads in 2019, the first such milestone for a major city.

Pop-up cycle lanes are another example of using temporary tactical town planning to reallocate road space and create an adaptable and flexible infrastructure given the limited space. Tactical town planning allows cities to test the impact by monitoring usage, ridership, safety, and effects on the city’s mobility system before adjusting the design to make those changes permanent. Based on WRI’s extensive experience with ‘complete streets’ interventions, such an approach can build community ownership and buy-in at low cost, creating the support and evidence needed to facilitate permanent change. .

Vision Zero Challenge panelists said cities looking to establish permanent cycle lanes should consider speed management strategies to ensure an efficient and safe mobility network for cyclists. Speeds below 30 kilometers per hour drastically reduce the risk death of cyclists or pedestrians, from 85% at 50 km / h to 10% at 30 km / h.

Many cities have already taken steps to reduce speed limits, especially in areas where cars, cyclists and pedestrians frequently conflict. BogotÃ¡ has been reducing speeds for several years now. And in Brussels, a city-wide speed limit of 30 km / h came into effect in early 2021 with the aim of increasing the safety of vulnerable road users. Many other European cities have also made efforts to reduce speed limits to 30 km / h over the past year, including by Spain and France.

However, speed limit reductions alone are not enough. In the USA, speeding has increased dramatically during lockdowns related to COVID-19. Physical traffic calming measures such as raised intersections and crossings, speed bumps and speed pads, fewer lanes, and narrow streets at intersections help to virtually limit vehicle speeds. Once appropriate speed management measures are in place, cities should consider designing appropriate cycle lanes for each type of road and speed limit when making temporary infrastructure permanent.

Certain track design features are critical to improving safety. These include a minimum width of 3 meters for one-way cycle lanes on arteries; placement of lanes in the same direction as adjacent traffic and the sidewalk; and entering and exiting lanes that provide safe spaces for slowing down, stopping and dismounting. A 13 years old to study Analysis of traffic accident data from 12 major U.S. cities found that separate and protected bike lanes resulted in 44% fewer fatalities and 50% fewer injuries compared to cities that did not implementation of such measures.

As ITF Policy Analyst Alexandre Santacreu said during the training: â€œIf you build a secure infrastructure that connects people to places, it should be obvious that it remains permanent.

The panelists stressed that when implemented in accordance with long-term development plans, safe and permanent cycling infrastructure can play a crucial role in cities’ visions for sustainable, accessible and equitable mobility in the post-era era. -COVID. Quality cycling infrastructure in all neighborhoods of a city, especially low-income areas, would encourage a low-carbon mobility option and help improve local air quality while improving access and connectivity.

So how can cities link cycling infrastructure to long term goals? The growth of cycling in the Netherlands provides a classic example, also born out of a time of crisis. During the OPEC oil crisis of the 1970s, Dutch cities implemented car-free days to discourage the use of private vehicles. As cycling grew in popularity, the widespread implementation of permanent cycling networks followed, eventually leading to the widespread cycling infrastructure and strong cycling culture that exists today. Political will, along with community involvement and support in decision-making processes, has proven effective for the Dutch in maintaining cycling as a central part of long-term urban development.

Today, some city leaders are already making cycling networks a priority in their sustainable development and post-COVID development plans. In September, the mayor of Paris Anne Hidalgo announced that the city’s 50 kilometers of pop-up cycle paths would be made permanent in the aftermath of the pandemic. Hidalgo also revealed that rue de Rivoli, one of the busiest streets in Paris, is on its way to becoming a multi-lane cycle highway. Not only do these plans respond to the evolution of mobility patterns, but they are part of the logic of the city climate and air pollution reduction targets.

As with the implementation of any infrastructure change, cities must allow continuous evolution when integrating temporary cycling networks. Engaging with local communities, monitoring continued use, progress and results of cycle lane changes, as well as prompt responses to the problems and needs of cycle lane users, are all important. Cities should aim to be flexible with the space they have and implement speed management strategies simultaneously in order to successfully apply the Safe System approach to road safety. In doing so, cities can be more resilient and shift models of urban mobility in a more sustainable and equitable direction.

Camille Zanetti is an urban mobility intern at the WRI Ross Center for Sustainable Cities.

Alejandro schwedhelm is an urban mobility associate at the WRI Ross Center for Sustainable Cities.

Claudia Adriazola Steil is Deputy Director of Urban Mobility and Director of Road Health and Safety at the WRI Ross Center for Sustainable Cities.